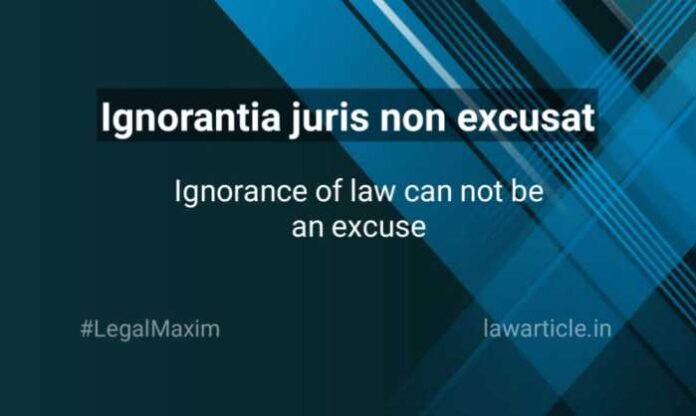 Ignorance of law cannot be an excuse.

It may be noted that ignorance of fact can be an excuse but not that of law. It is generally accepted that the maxim had its origin in Roman law and there is a direct mention about the same in “The digest of Justicia” or Justinian’s Code.

It is stated therein that ignorance of fact may be excused but not ignorance of law. It is a matter of common knowledge that English law is largely based on Roman law and thus naturally, the maxim crept into English Common law also.

It is a legal principle holding that a person who is unaware of a law may not escape liability for violating that law merely by being unaware of its content. The rationale of the doctrine is that if ignorance were an excuse, a person charged with criminal offenses or a subject of a civil lawsuit would merely claim that one was unaware of the law in question to avoid liability, even if that person really does know what the law in question is. Thus, the law imputes knowledge of all laws to all persons within the jurisdiction no matter how transiently.

Even though it would be impossible, even for someone with substantial legal training, to be aware of every law in operation in every aspect of a state’s activities, this is the price paid to ensure that willful blindness cannot become the basis of exculpation. Thus, it is well settled that persons engaged in any undertakings outside what is common for a normal person will make themselves aware of the laws necessary to engage in that undertaking. If they do not, they cannot complain if they incur liability.

The law in the country is all pervading. All our actions are dependent on the law. We have all sorts of law including Criminal law, Constitutional law, Family law, Intellectual property law etc. Ignorance of any of these laws can never be an excuse.

The maxim was considered by the Hon Supreme Court in Motilal Padampat Mills Ltd Vs State of Uttar Pradesh reported in (1979) 118 ITR 326(SC). The Hon Court observed as follows:

“It must be remembered that there is no presumption that every person knows the law. It is often said that everyone is presumed to know the law, but that is not a correct statement: there is no such maxim known to the law.”

So the Hon court in very clear terms has stated the law. There is no room for doubt. In a case decided by the Hon Supreme court the judges openly admitted that they have never heard of the law which was stated to have been violated by an illiterate person in a remote village. Therefore, the Hon court acquitted the person charged for violating that law. India did not bluntly apply the maxim.

A Dark Root in Cyberspace

ABOUT US
The main purpose of this website is to make people aware about the law, to make them aware and to help in getting legal justice. All information related to Indian law, justice system, education is published on this website.
Contact us: info@lawarticle.in
FOLLOW US
Copyright © 2016 - 2021 - LawArticle - All Rights Reserved.
MORE STORIES